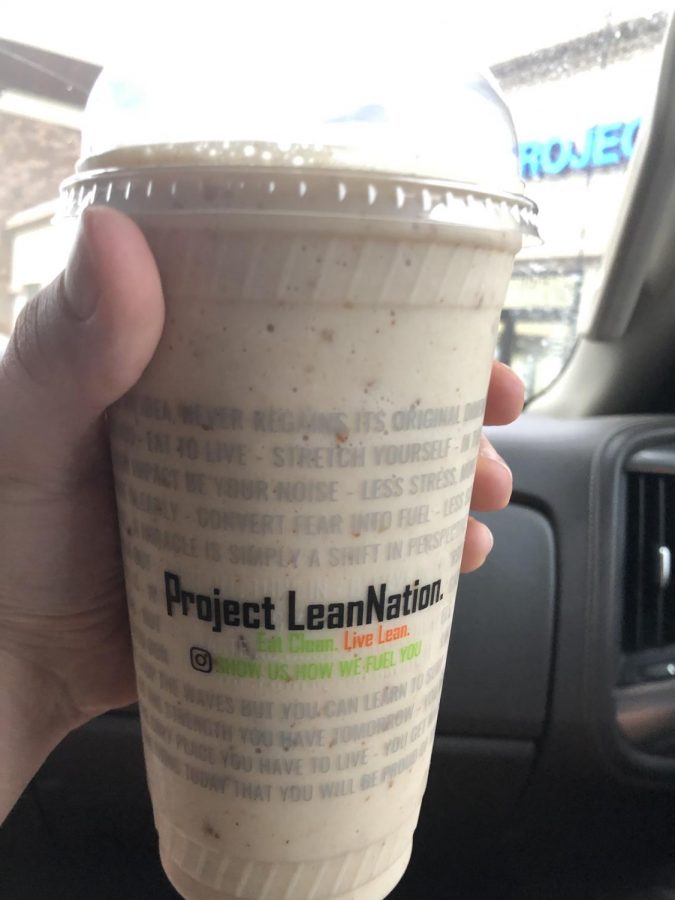 The 'Hangover' shake, at Project Lean Nation. This shake was cool and refreshing following a workout.

Project Lean Nation, better known as PLN, is a popular fitness oriented shake and food venue located on 1900 South Clinton Ave. The eatery it is walking distance from McQuaid Jesuit, and has become popular among student-athletes.

Customers can choose between 10 different shakes, which are separated into three categories: Energy Boost, Quick Meal, and Recovery. These shakes are composed using healthy fruits, vegetables, and other ingredients. Then, shakes are given a healthy boost using protein powder, or amino energy.

Despite being much less popular among students, PLN also offers meal plan services. This program provides customers with healthy and good tasting meals to help with reaching fitness goals.

Nevertheless, the shakes remain the premier product for student-athletes. Athletes often run into a teammate or friend when going in for a shake.

With the high praise it has received from friends and teammates, “Clockwork Orange” seemed like the perfect place to start. Clockwork Orange is understandably one of the most popular shakes. It is orange juice based, and contains both protein powder as well as amino energy, making it a great shake following an after school football lift. The shake has a refreshing and tangy citrus flavor like one would expect given the ingredients. The taste of protein powder is virtually non-existent. In the hours following drinking it, energy levels spike.

However, despite the simplicity, containing only three ingredients, the shake costs the same amount as all other shakes which are much more complex. Overall the shake was great but the simplicity means many people may prefer other options.

The next shake was the “Hangover.” The Hangover was great. It had a refreshing banana and maple syrup flavor with a creamy texture. It was much heavier than the “Clockwork Orange,” and much more filling. It also noticeably helped with recovery a lot. The maple syrup used is sugar free despite not tasting any different than the sugary syrup found on store shelves. Overall, this shake was fantastic.

Following the “Hangover” was the “Gladiator.” The Gladiator tastes essentially the same as the Hangover although it is slightly more calorie dense. It is however missing the sweet maple syrup taste. The Gladiator was great and can be especially enjoyed to satisfy hunger and thirst following a workout. Although the Hangover was still slightly better than the Gladiator.

The final shake reviewed was the “PB&Jacked.” It is also one of the most popular shakes offered. It is meant to taste like a peanut butter and jelly sandwich. The shake does a fantastic job at replicating this unique flavor. The rich taste of the shake is interesting but not unwelcome. The texture was the weakest of the bunch. It was chalky and reminds the drinker that there is protein powder inside the shake, a texture most people not very fond of. Overall it is a solid shake, but not the strongest on the menu.

The shakes all tasted great, as well as having a significant impact on recovery and energy levels throughout the day. Although being a little on the expensive side,  each costing $8.50 plus tax, the shakes are definitely worth it due to the combination of healthy ingredients and fun combinations made shakes most would never think of on their own, let alone have the time to make.

The atmosphere inside the store itself fits the brand of the store. Motivational quotes and an open sitting area were very fitting of the message the company was trying to convey. Great service was the cherry on top of shake experiences at PLN.

With all these options of healthy shakes, it is not unwise to assume that the remaining shakes are probably very enjoyable. Project Lean Nation is open everyday from 9:00am-6:00pm.