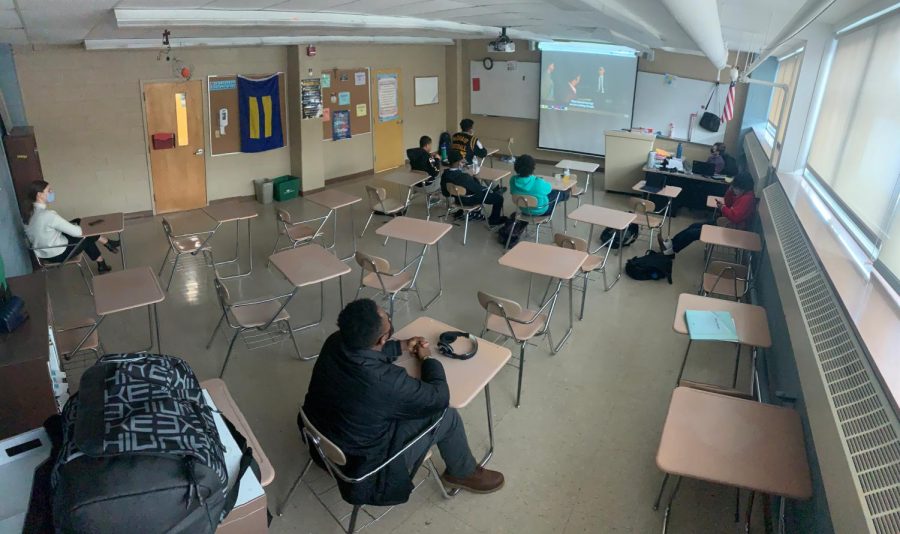 The St. Benedict the Moor's Black Student Union's movie screening of "One Night in Miami". "One Night In Miami” a movie that followed the stories of Cassius Clay, Malcolm X, Sam Cooke, and Jim Brown and how they all struggled with racism in America, was chosen to be shown during Black History Month because it showcased the racial prejudices that were formed against African Americans by White Americans during the 1960s. The movie also show cases how the people featured in the movie stood up against racial prejudice and fought for justice.

The Black Student Union also held a fundraiser for The Boys and Girls Club of Rochester throughout the month of February, where they sold black and gold rubber bracelets with the message “BE THE CHANGE” on them for $5. All the proceeds collected from the bracelet sales were donated to The Boys and Girls Club of Rochester. Over $1000 was raised during the course of the month.

The Black Student Union also showed movie screenings during Black History Month that help promote a better understanding of prominent black historical and cultural figures. One of the movies shown was “One Night In Miami.” “One Night In Miami” is a movie that followed the stories of Cassius Clay, Malcolm X, Sam Cooke, and Jim Brown and how they all struggled with racism in America, but also how they lifted each other up. Each character faces heavy racism in their own individual story, but work hard to send a message of equality and justice through their respective medias.

“Black History Month puts a focus on discussing and uncovering black excellence in the past since it has been ‘white washed’ for hundreds of years,” said  McQuaid math teacher and Black Student Union moderator, Matthew Rybak.

“‘One Night in Miami’ is significant because it combines the stories of black figures that we know of and allows us to follow their struggles and witness how hard they worked to fight for justice. What I thought was interesting was that the professional diversity of the characters allowed anyone to connect with this group. Jim Brown was an NFL player turned movie star, Cassius Clay (eventually becoming Muhammed Ali) was the best boxer in the world, Malcolm X was a religious and social leader, and Sam Cooke was a very talented artist. So no matter what your interests are as a person, chances are pretty good that you can relate to one of the characters.”

Co-Founder of the St. Benedict the Moor’s Black Student Union and President of the Mosaic Club, Jerome Job ‘22, highlights the importance of celebrating Black History Month, and specifically why it is important that we celebrate Black History as a McQuaid community.

“Simply put Black History is American history. By understanding the nature of the past we gain the understanding to confront the problems of our future. Especially now in a time where our country is in a crisis we must demonstrate unity and hope within our own circles. For us it was McQuaid. to be a part of positive change in an environment we love was truly a blessing. By helping nurture and grow the McQuaid community we ensured that the future generation of students will continue the Ignatius legacy of being true men for others,” said  Job ‘22.

The Black Student Union future plans include hosting the Maya Angelou Poetry Competition and a day where soul food will be catered from a locally black owned restaurant.