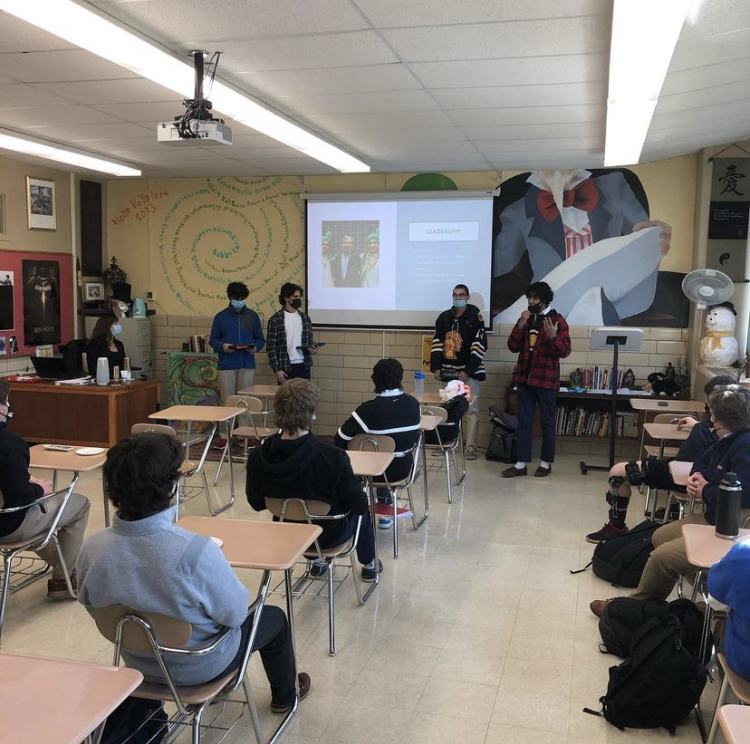 Rohan Vyas '22, Jerome Job '22, Gavin Patel '22, and Kabir Deol '22 addressing the first ever Indian Interest Club meeting at McQuaid, on March 5th. Jerome Job talking about some of the topics that will be discussed during IIC meetings.

The IIC had its first meeting on March 5 of this year. The club was founded by Gavin Patel, ‘22 and Rohan Vyas ‘22. Rohan and Gavin felt that there was a lack of representation of the Indian community at McQuaid, so they created this club with the hope of bringing awareness to Indian and Hindu culture to the McQuaid community.

So far, during IIC meetings they have shown clips from Bollywood movie “3 Idiots”, after watching the movie they explored the messages behind the movie and the cultural relevance.

Founders of the IIC, Rohan Vyas and Gavin Patel talk about the importance of having the IIC at McQuaid Jesuit.

“I firmly believe that the IIC is a testament to McQuaid’s spirit of inclusion and receptiveness to new topics. There are over 1.5 billion people who are a part of Indian culture all over the globe which makes it increasingly important to be aware of their culture and traditions. Moreover, the IIC will be a great way for McQuaid students and faculty to learn something new, have fun, and relax after a rigorous week! Overall, the IIC will help our community be more educated and inclusive,” said Rohan Vyas, ‘22.

“I am glad that McQuaid accepted the IIC, because of the importance that it has on the community. People who may not know anything about the Indian culture, or religion have the chance to learn something, and try something that may be different to them,” said Gavin Patel, ‘22.

The IIC plan on holding their next meeting next Tuesday, April 20th, 2021. For any questions regarding the IIC reach out to leaders Rohan Vyas, Gavin Patel, Jerome Job, Sean Salil, or Kabir Deol. For more information and updates on the IIC check out their Instagram page (@mcq.iic).