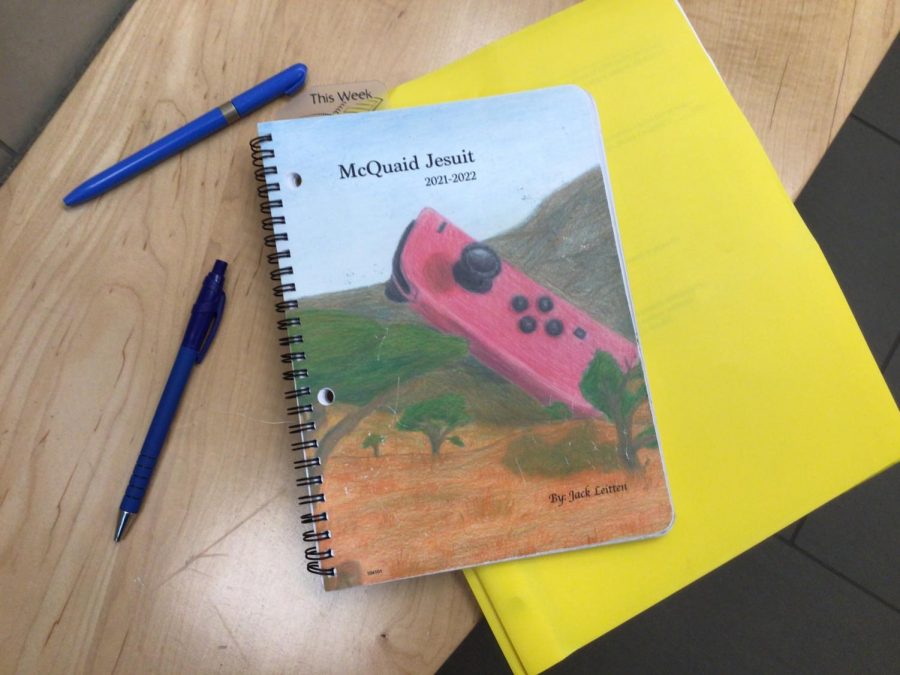 The student artwork on the cover of the 2021-2022 McQuaid agenda was inspired by a video game controller.

The cover of the new McQuaid student agenda, or daily planner, is an interesting one. Drawn by John “Jack” Leitten ’23, it depicts a large red object abruptly breaking up a serene landscape.

The inspiration behind the scene is actually the Nintendo Switch controller.

“It’s of a giant joycon in a savannah,” Leitten said, referring to the game console’s primary controller.

But what is a Nintendo Switch? Well, it’s a videogame console released by the Nintendo company in 2017, which aims to be both a portable and at-home device to play Nintendo’s games on.

Leitten described why he chose this console’s controller over others, saying, “I like joycons and Nintendo Switch. I was thinking of cool colored landscapes, and that one just came to mind.”

And he’s right: the landscape is quite “cool” in contrast to the alien controller, which dominates its composition.

Leitten described his process of creating art, including the agenda covering one.

“Start with a sketch, then choose your colors, do a little bit of a test on another sheet of paper. And then once you pick your colors, you do it in colored pencil until it looks right,” Leitten said.

Overall it is a straightforward process, but one that takes building up skills over a long time to master.

Leitten is usually more of a digital artist.

“I usually do [art] digitally, but in art class I have to do it on paper,” he said. Regardless of how he typically makes his art, his lesser-used style of artistry is still impressive.

Overall, Leitten’s inspiration for the piece was rather straightforward; he placed something he loves in a beautiful and imaginative landscape.